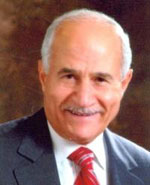 Ifrane, April 3, 2012 – Mohamed Rabie, author and former professor of International Political Economy at Al Akhawayn University, gave a talk on “The Global Debt Crisis and Liberating Nations from the Debt Burden” to Al Akhawayn students, faculty, and staff on April 2, 2012.

Hosted by the School of Humanities and Social Sciences and the School of Business Administration, the talk examined the near collapse of the international banking system in September 2008 and the Great Recession, and exposed the seriousness of the American and European financial and economic crises. Rabie and the discussants revealed how these crises are due not only to inefficient economic policies and political management, but to European and American loss of competitiveness as well.

Mohamed Rabie outlined a plan to liberate all countries from debt. “This is a plan that challenges the way economists currently think,” declared Rabie who believes that this plan can only be successful with second-generation economists. Part of his plan would be the creation of a fund to build 50 universities, strategically placed around the world, that would train the future leaders of a globalized world.

Mohamed Rabie has published 26 books, more than 50 academic papers, and over 1,000 newspaper articles. He has participated in over 80 conferences throughout the world.

“I am happy to be back to Al Akhawayn campus, happy to be home. I had such a great experience here that I have recorded it in my memoirs that will soon be published,” said Rabie.

For a full biography of Mohamed Rabie, click here.