President Bensaid at the ICESCO Conference on the Arabic Language 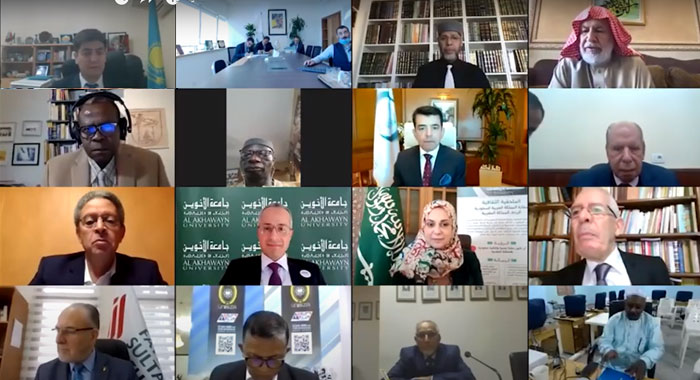 Al Akhawayn University President, Amine Bensaid, delivered a speech at the Islamic World educational; Scientific, and Cultural Organization (ICESCO) International Conference held in celebration of the World Arabic Language Day on December 21st. The theme of the conference was: ‘Arabic Language Foresight in a Changing World’ and President Bensaid presented on the university’s role in developing the Arabic language and facilitating its learning for a young reader.

Held in cooperation with King Abdulaziz University in Saudi Arabia, UNESCO, the Cultural Attaché Office at the Embassy of the Kingdom of Saudi Arabia in Rabat, and Al Akhawayn University in Ifrane, the Conference aims to develop forward-looking visions for Arabic language promotion. “Al Akhawayn University has undertaken some initiatives that support the reform process undertaken by the Ministry of National Education to encourage reading in the Arabic language. As part of AUI’s social responsibility and its role in spreading knowledge and encouraging creativity and creators, a Center for Arabic and Literacy Education (CALE) was established,” stated President Bensaid.

The conference also aims to open communication and coordination channels between Arabic language academic institutions, and specialized international organizations, enhance the roles and status of the Arabic language at the international level, facilitate the access of the Arabic users from digital technology, and preserve the integrity and vitality of Arabic. The conference brought together several ministers and heads of Arabic language, universities, international organizations, academies and centers, from the Arab world, Europe, Africa, North America, Central Asia, and Southeast Asia.