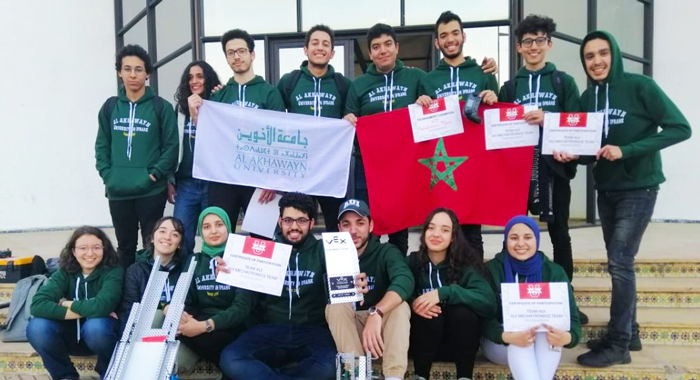 Al Akhawayn University is proud to announce the AUI Mechatronics Team will head to Louisville, Kentucky on April 22-25 as one of two Moroccan teams qualified to compete in the VEX-U International Competition.

AUI’s team placed first in the national Moroccan VEX-U Competition in Rabat, earning them a spot in the international edition of RoboTalent’s competition. They competed with two custom robots against four teams from various locations in Morocco. Team members designed the robots over a period before the competition and operated them at the tournament in a strategic game against the other teams. These robots are partly autonomous and partly driver controlled. The robots are required to stack boxes in a competition like a board game, where each alliance plays with the two robots they designed. There were multiple matches in the tournament, but AUI ultimately won the final rounds with one loss, three ties, and two wins.

The team’s captain, Farouk Lemyesser, states, “Even though we had almost finalized our design, we still had to make quick adjustments during the competition that are specific to each opponent whether be it strategy, design, or playing style. The team stayed coherent through our toughest moments, and we had many of those. But eventually, we managed to snatch the win from a very difficult opponent: 1337, who were truly a worthy adversary.”

While there are 23 members of the Mechatronics Team, only 15 took part in the competition and will advance to the international round. Over the 2019-2020 winter break at AUI, the Mechatronics Team recruited around 40 potential members. Each member was assigned learning tasks to help with the design and programming of their robots. After beginning the design and testing processes, only 23 members were asked to officially join the team. The final team includes students studying general engineering, engineering management, computer science, and business.

“We are grateful for each of our mentors – Dr. Kevin Smith, Dr. Rachid Lghoul, and Dr.  Rachidi – along with Mrs. Bouchra Saad for her commitment to team logistics and coordination,” said Lemyesser.