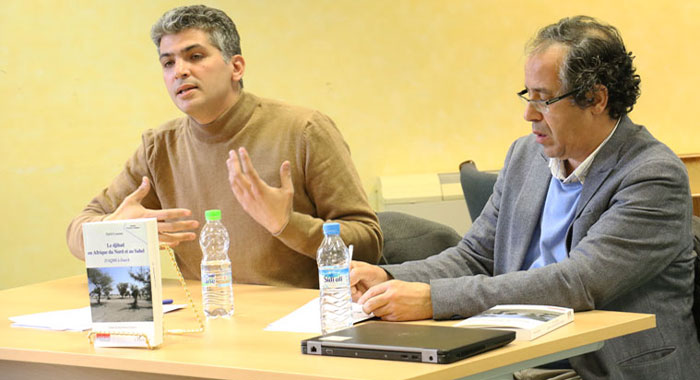 Dr. Lounnas began the talk with acknowledgements, before explaining that his book is based on hundreds of interviews, conducted all over the region from Mauritania, Libya, to Algeria, Morocco, Tunisia and Mali. Interviewees were emirs, officials, NGOs, and citizens, and the purposes were to trace the trajectory of jihad in North Africa and the Sahel. The book illustrates the constant adaptation and restructuring of the organizations to their environments and explores how these violent extremist groups continue to exist despite the crackdown from national and international authorities.

Furthermore, Dr. Lounnas explained the gradual challenge caused by Daesh, which started in the Middle East and expanded into North Africa by focusing on the mechanics technicalities of these organisations. Jihadism, he explained, served as “social security” for many communities, and he investigated the technical aspects of their governance.

The book also approaches these organizations as cultural organizations, with a focus on their ideology. It tries to answer questions such as: how do they understand the international system? How do they interpret their religion? How do they see citizens and the regimes in place? Why did they join? In simple terms, who are they? This means eradicating widespread misconceptions such as the social and educational backgrounds of their members, and bringing more nuance and complexity to an often overly-simplified topic.

Dr. Lounnas explained where these groups come from and their dynamics. He addresses questions such as how did the emergence of Daesh challenge al Qaeda’s hegemonic affiliations? How do Daesh and Al Qaeda compete? He also highlights the differences in the dynamic between the two groups in North Africa and in the Middle East.  A re-exploration of the vérité établie, Dr. Lounnas explained that the lived experiences of the leaders and members are more complicated than the average News consumer believes. Additionally, negotiations with state authorities and their policies hold more than meets the eye, and this book unveils just that.