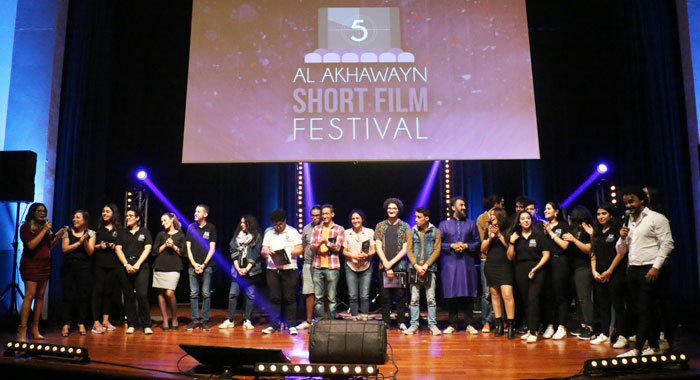 On October 1- 3, 2019, Al Akhawayn University organized the fifth edition of its Short Film Festival. This annual cultural event covers three main activities: a national student short film competition, screening and discussion sessions by famous Moroccan filmmakers, and filmmaking workshops. Al Akhawayn Short Film Festival is the only national platform that allows young students from Morocco to meet, learn, and converse with cinema-industry leaders without registration fees and artistic or technical restrictions. The theme of this year’s Short Film Festival was “Voice of Youth” - including debates about how youth today shape their creative voices for all types of screens and an ever-changing entertainment industry.

During the three-day festival, students had the opportunity to enrich their knowledge in the field of cinematography through workshops, discussions, and round tables. The involvement of the community-at-large in the festival allowed for rich dialogue surrounding a wide range of perspectives and experiences.

This fifth edition featured Hicham Lasri as president of the jury. Together with Mr. Lasri, Lamia Chraibi, Sonia Terrab, and Youssef Ziraoui determined winners from the submissions of nine participating schools. Beyond their jury roles, Lamia Chraibi premiered Talal Semhali Achoura's film, Sonia Terrab discussed her relevant web series "Marrokiates” produced by Jawjab, and Youssef Ziraoui participated in a round table conversation. These events allowed students to learn from veteran cinematographers’ experiences and further understand the nuances of audiovisual production.

The Festival concluded with a ceremony where the names of film competition winners were announced for three different categories: documentary, advertising, and fiction. Each category had two winners, one of an audience award and one of a jury award. In the documentary category, Mouad Mabrouk from Al Akhawayn University won the audience choice award for his documentary “Silver Threads” and Ousmane Cissokho from l’Ecole Supérieure des Arts Visuels (ESAV) Marrakech won the jury prize for his documentary “Indetectable.” In the category of advertising, Romy Boutin St-Pierre and Ingrid Taveras, both from Al Akhawayn University, won the audience and jury prize. Finally, Abdallah Mounir & Camila Messari from Al Akhawayn University won the audience prize for their fiction film “Blind Love” in the fiction category. Hamza Makdoum and Reda Sabor from l’Institut Spécialisé du Cinéma et de l’Audiovisuel (ISCA) Rabat won the jury prize for their fiction film “The Waiting.”

This edition of the Al Akhawayn Short Film Festival received submissions of 39 films, with 24 being accepted from eight different schools across Morocco to compete for the title of “Best Student Filmmaker of the Year” in their category.