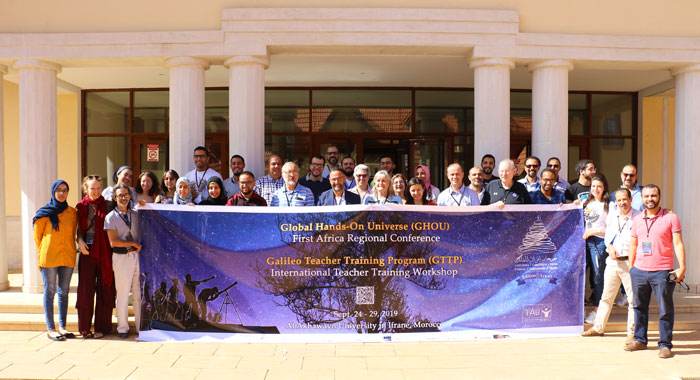 Last month Al Akhawayn University hosted the First Africa Regional Conference of the Global Hands-On Universe (GHOU) and the GTTP International Teachers Training Workshop as part of the eighth annual Astronomy Festival. Organized by Al Akhawayn’s astronomy club, the festival’s theme was “Space Exploration: What Importance?” to promote student curiosity about astronomy science. Al Akhawayn is pleased to invest in these conferences in order to promote scientific careers to Moroccan youth and stimulate their interest in science and technological advancement.

The Galileo Teacher Training Program (GTTP), held September 24-25, 2019, provided international training for teachers and professors about educational practices in astronomy. The goal of the GTTP is to create a worldwide network of Galileo ambassadors and Galileo teachers who can effectively use and transfer educational astronomy tools and resources into classroom science curricula. The Galileo Teachers are equipped to train other teachers in these methodologies.

Subsequently, on September 25-29, GHOU’s First Africa Regional Conference harnessed this training for educators in order for students to benefit from their astronomical knowledge and training. The conference was a platform for astronomers, scientists, and educators to collaborate and share hands-on activities for teachers and students around the world to do what astronomers do. GHOU's first Africa Regional Conference focused on promoting telescopes to bring space sciences to the classroom, as well as expose students to global astronomy educational projects and campaigns of the 21st century.

In order to encourage and promote the scientific field in Morocco and Africa in general, the organizers of the eighth Ifrane Astronomy Festival chose to honor Professor Jamal Mimouni, eminent astrophysicist and professor at the Mentouri University in Algeria, President of the African Astronomy Society (AfAS), and Vice President of the Arab Union of Astronomy and Space Sciences (AUASS). This honor recognized his outstanding contribution in the popularization of space sciences in Africa and the Arab world.