AUI hosts Summer School on "Variation of the Human Genome" 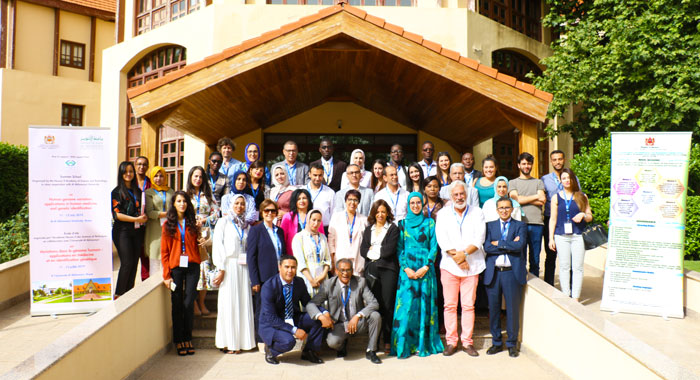 Hassan II Academy of Science and Technology in partnership with Al Akhawayn University in Ifrane and with the support of the Moroccan International Cooperation Agency (AMCI) organized its summer school on "the variation of the human genome", from July 11th to 13th , 2019 at AUI’s Conference Center.

The summer school recognized specialists from Morocco, Africa and other countries, including 15 PhD students and 25 researchers working in various Moroccan and international institutions. Sequencing of the human genome has shown that 99.5% of human DNA is identical. Interindividual variations nevertheless include a few million variants, including single nucleotide polymorphisms (SNPs), insertions and deletions (indels), and other structural variants including copy number variations.

In human pathology, rare genetic variants, particularly located in the coding regions, are associated with monogenic hereditary diseases. Complex interactions between the environment and more frequent genetic variants, located on several genes, are at the origin of chronic diseases such as diabetes or arterial hypertension. The interindividual variability in drug response is explained by genetic polymorphisms, which affect genes encoding enzymes, transporters or receptors. The study of the variability of the human genome, associated with different reactions to drugs, including those related to somatic mutations of tumor cells, is at the basis of pharmacogenomics and targeted therapies.

In the field of the genetic identification of people, the craze for SNP variants continues to grow, at the expense of STR variants (short tandem repeats) long used in forensic applications. These SNPs are also markers of choice in molecular anthropology to distinguish paternal and / or maternal lines from different groups (haplogroups) and thus estimate the ethnic origin of the individuals examined.

The major challenge of human genomics research remains the treatment and analysis of these genomic variations, the understanding of their consequences on human health and the identification of new potential targets for innovative therapies. The various techniques of sequencing the human genome and the huge databases of genomic variants that they generate concern the health of individuals as well as their right to privacy; this results in ethical issues that society should answer.