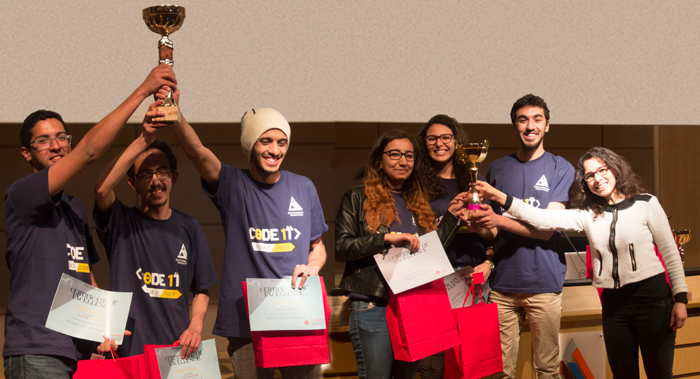 The teams, entitled “FUN Team”—composed of Omar Moussa, Ahmed Lekssays, Mohammed and Khalil Ait Brahim—“Byte You Like a Ginger Team”—composed of Achraf Mamdouh, Rim Benyaich, and Manal Hamdi—"Digimon Team”—composed of Mohamed Aghzal, Hamza Ait Hssayene, and Aymane El Alami—and “Crescendo Team”—composed of Zakaria Saad El Asri, Ayoub Kachkach, and Nisrine Zerouali—were asked to solve a series of ten problem sets, all of which were prepared and tested by Moroccan judges based in Morocco and in France in an effort to push teams’ ability to problem solve. Solving eight and seven of the 10 sets respectively, “FUN Team” and “Byte You Like a Ginger Team” outscored the 36 other teams from across 18 other higher education institutions in 10 different cities, bringing home both the first and second place trophies.

“The contest was not easy,” said “FUN Team” member Ahmed Lekssays,“ we succeeded in solving eight challenging problems, but we couldn’t solve the two remaining [ones] as they were extremely difficult.”

In order to participate, both “FUN Team” and “Byte You Like a Ginger Team” were forced to compete as ‘unofficial teams’ due to eligibility issues: both Achraf Mamdouh and Khalil Ait Brahim had competed in two previous editions of the International Collegiate Programming Contest (ICPC) World Finals, once in 2015 and again in 2018 following their regional qualification in the Arab Collegiate Programming Contest (ACPC) where they placed 12th out of the 120 participating Arab teams.

In an effort to encourage university teams’ competition, the organizers decided to award prizes to the top teams regardless of their status. “We competed as unofficial teams,” said Achraf Mamdouh and Khalil Ait Brahim on this subject, “in order to further sharpen our problem solving skills, demonstrate our programming talents, have fun, and compete for a chance to win Code-IT prizes.”

AUI is very proud of its students and would like officially congratulate all four participating teams for their wonderful performances.