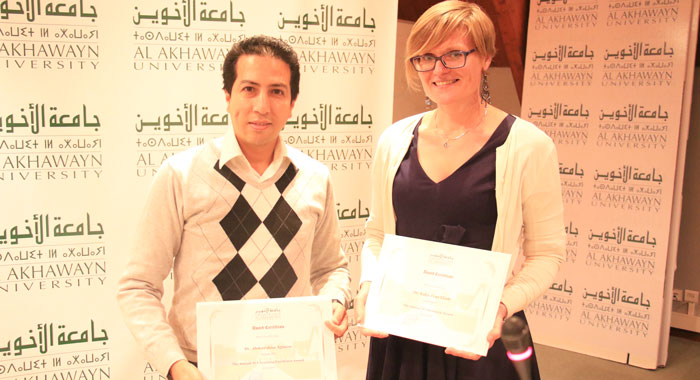 Abderrahim Agnaou: Teaching Award
Dr. Abderrahim Agnaou, SHSS Professor, has recently been awarded AUI's top teaching award in recognition of his excellent pedagogy and his dedication to his students. Dr. Agnaou holds a doctorate in Applied Linguistics with a concentration in Educational Technology. He studied in Rabat, Fez, and Montreal. After graduating in 2001, he worked for two years at the International Institute for Higher Education in Morocco (IIHEM) in Rabat and at the Private Polytechnic Institute of Casablanca (IPPC). He later worked as a Multimedia & E-learning Manager at a private training institute in Casablanca for four years before joining AUI, where he has been a faculty member since 2006, first at the Language Center, then at the School of Humanities and Social Sciences (SHSS).

In addition to his teaching duties at the SHSS, Abderrahim served as the Undergraduate Academic Coordinator for three years (Feb. 2014–Feb. 2017). Over the last twelve years he has been working at AUI, Dr. Agnaou has served on many University-wide committees and boards/councils, including the Academic Council for two terms, the Assessment Charter, the No Violence Task Force, Strategic Planning, NEASC Accreditation, Community Service, Service Learning, Student Mobility Grant, Faculty Evaluation, Faculty Search, and recently Staff Hiring. Since Spring 2017, he has served as the University GenEd Coordinator in charge of assessing and monitoring the General Education component of the undergraduate studies programs. He has also advised the student run “Hand-in-Hand” Association and the Student Government Association (SGA). He has also served as an adjunct professor of "Intercultural Communication" and "Technical Communication" in two different Master's programs at Moulay Ismail University of Meknes. His research interests include educational technology, multimedia instructional design, e-learning 2.0, digital humanities, quality assurance in higher education, strategic planning, and communications.

Katja Žvan Elliott: Research Award
Dr. Katja Žvan Elliott, SHSS Professor, has recently been awarded AUI's top research award for her perseverance and the quality of her analysis in her myriad publications. Dr. Elliott is an “Area Studies” specialist, focusing on gender, law, politics, and development in Morocco and North Africa, and the Middle East more generally. More specifically, thus far, her research has dealt with the rather problematic role of aid-dependent semi-authoritarian states on the politics of women’s rights reforms. Her research for the time being is based solely in and on Morocco; however, the bodies of scholarly literature that inform her field deal with the larger North Africa and Middle East regions, but also other developing regions, such as South Asia and Sub-Saharan Africa.

Though mostly trained by political scientists, in her own work and approaches to social issues she uses anthropological research methods. Hence, for her DPhil dissertation (2012) and her first book Modernizing Patriarchy (2015), as well as for the journal articles (2009, 2014, 2015), chapters in edited volumes (2012, 2018) and her current research project on the politics of gender-based violence (GBV), she has conducted extensive ethnographic fieldwork, which is allowing her to better understand human behavior, actions, and motivations. Such fieldwork, where she lived in a community in Errachidia province for a prolonged period of time (October 2009–June 2010), or worked on a daily basis with one of El Hajeb’s women’s rights association (May 2016–August 2016), allows her to see people’s attitudes towards legal reforms, for example, as well as how the state, through its laws and administrators/officials, interacts with particularly low-income populations. In addition to the participant/observation method, she also conducts in-depth semi-structured interviews with various populations—clients of the Listening Center for Victims of Violence, lawyers, and judges—organizes focus groups, and surveys.

She is currently working on finishing an article on the ethnography of GBV. Much has been written about how culture and religion affect (and sometimes even justify) GBV, political economy of GBV, but a more thorough narrative and analysis of experiences of victims of violence, their encounters with state and its agents is missing. As a result of this lack of data and general misunderstanding of violence, the state is unwilling and/or unable to amend its laws, procedures, and mentalities.