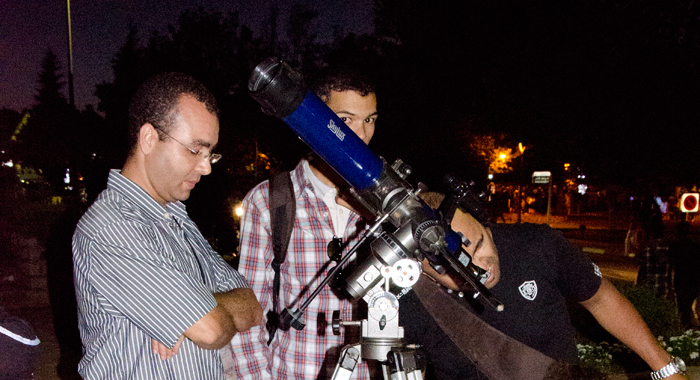 Amateur and professional astronomers, children, and the general public where invited to look at the sky with curiosity during the third annual Astronomy Festival of Ifrane, which took place September 4 -September 7 in downtown Ifrane.

Exploring a theme of “Astronomy in popular culture,” the festival was organized in collaboration with the Province of Ifrane, the Network of Amateur Astronomers of Morocco, Al Akhawayn’s Center for IT Innovation (CITI), and the Casablanca Astronomy Association.

“We have invited professional and amateur astronomers from all over Morocco to share their knowledge with the general public through different workshops and activities,” said Dr. Hassan Darhmaoui, Professor of Physics at Al Akhawayn University and President of the Festival.

Consisting of lectures, discussions, and informal exchanges between astronomers and the public, the festival aimed to familiarize the public with astronomy topics such as the exploration of the solar system, constellations, and the measurement of time. The festival also included screenings of films and documentaries on astronomy.

On the first day, the festival also held a competition centered on the theme of the sky, our common heritage followed by prize distribution to winners and a lecture about Scientific and Popular Astronomical Knowledge in Morocco: Historical Landmarks. On the second day there were two lectures, the first one about celestial threats: myths or reality, and the second one about Astronomy in the Popular Culture. A special lecture was organized on the third day by the youngest astronomer in Morocco, called Mimoun who  is a mere 10 years old and who made a presentation on the giant starts from the family of the sun. He showed a great sense of self-confidence about his subject, and  great knowledge about his subject, and left a wonderful impression on the audience in the auditorium. The final lecture, it was about Glimpses of astronomy in Moroccan culture.

Concurrent with the festival, Al Akhawayn University organized the 3nd edition of the Galileo Teacher Training Program. Educators who participate in the GTTP program learn skills and techniques for integrating astronomy education into classroom science curricula.

“This year, we have again tried to popularize astronomy among the general public, in particular to highlight the peculiar nature of the city of Ifrane,” said Dr. Hatim Maddani, General Manager of Astromed Maroc and amateur astronomer. “We are very happy about the second installment. We hope that next year’s will be better.”