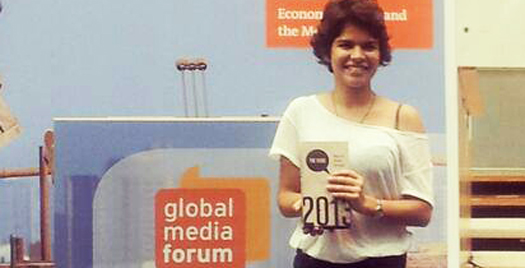 Student Houda Lamqaddam (‘13) won the 2013 Best Social Activism Award at the Deutsche Welle Global Media Conference in Bonn, Germany, on June 17-19, 2013. Under the theme of "The Future of Growth: Economic Values and the Media," the sixth installment of the conference gathered distinguished guests such as Avram Noam Chomsky, American political critic; Vandana Shiva, Minister of Foreign Affairs in Germany; and other renowned German political actors.

Houda Lamqaddam attended the conference as a representative of the crew that made the documentary 475:  When Marriage Becomes Punishment, produced by Nadir Bouhmouch with her assistance directing, writing the script, and narrating the story of Amina Filali, a 16-year-old Moroccan girl who, in 2012, committed suicide after she was forced to marry her alleged rapist. 475 refers to Article 475 in the Moroccan Penal Code that makes young girls marry their rapists to save the family’s honor, thus freeing the criminals from all charges. 475, the film, was released online in February 2013.

“The film is further evidence of Houda’s commitment to national social issues particularly those relating to the status of women,” said Cherif Bel Fekih, Vice President for Student Affairs.

The Deutshe Welle Global Media Forum is organized in light of the world economic challenges to debate concepts such as energy turnaround, green economies, social justice and environmental responsibility, bringing together experts from politics, business, finance, culture, academia, civil society and the media around more than 50 workshops and podium discussions. (Click here for the source)