Youth of Today Have imprint on Tomorrow’s Future

“You live in a space of excellence and you will definitely leave an imprint on the Morocco of tomorrow,” Ouzzine said addressing the students. “We rely on you, be part of the already existing various national development projects that will not succeed without your effective contribution and support.”

Speaking before an audience captivated by his natural down-to-earth style interspersed by humorous remarks, the minister tackled briefly the subjects of youth and sports in Morocco before moving to listen to the students’ questions and concerns. In his lecture, he highlighted the importance of youth participation in the development of the country advocating minor initiatives and quoting in this sense one of his old friends who said “every single contribution despite how small, minor, or insignificant it may look, can mean much, can make a difference, and can contribute to the development of the entire system further.” 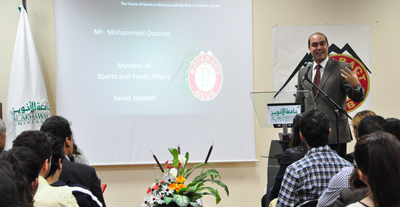 When speaking about sports in Morocco, Ouzzine reflected on the recent negative results and attributed them to the lack of vision, strategy, resources, and conditions. He described the situation as an equation where investment and excellence coexist; adding that success in sport necessitates facilities, training and coaching, good governance, and resources.

The minister fielded a large number of questions mainly on steps to improve the standard of  national sports, mainly soccer and swimming, as well as on the role of Al Akhawayn students in the national debate on youth. The minister promised to hold a round of this debate at Al Akhawayn University. Issues like sport scholarships, good governance, and professional training for coaches were also raised.

Right after the lecture finished, the minister and the guests moved to watch for a while a soccer game where Al Akhawayn Lions played against Immouzzer Mermoucha in the campus soccer field. 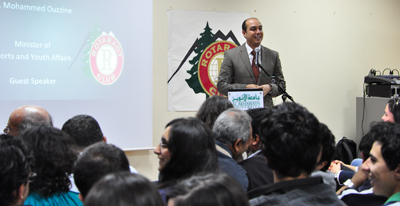 The lecture knew the presence of His Excellency Aziz Mekouar, former Ambassador of Morocco to the US, who paid a courtesy visit to the University during that day.

Along the lines of the mission of Al Akhawayn University and its social responsibility, the mission of Al Akhawayn Rotaract Club is to foster leadership and responsible citizenship, encourage high ethical standards in business, and promote international understanding and peace. Al Akhawayn Rotaract Club organizes health awareness days, blood drives, circumcision operations for low-income families in the Ifrane region, as well as other social activities. The club had been awarded a prize for the Best Action for Public Interest during the Rotaract MENA District Conference in Tunisia on March 2011.