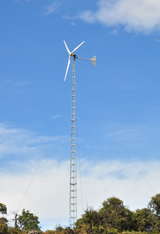 Ifrane, October 4, 2012 – The first African initiative to make hydrogen from water using wind energy has been successfully launched at Al Akhawayn University in Ifrane, Morocco, during the week of September 24-30, 2012, promising a greener campus.

Supervised by Khalid Loudiyi, Professor at Al Akhawayn School of Science and Engineering, in cooperation with Khalid Benhamou from Sahara Wind Inc . The wind to hydrogen system consists of three wind turbines, each with a 5,000-Watt capacity, and a hydrogen electrolyser. The wind farm is installed on the campus of Al Akhawayn University in Ifrane, north of the Soccer Field. It will provide the electric energy needed to operate the electrolysis of water and obtain the required hydrogen at up to 99.99 purification level.

“The wind and hydrogen systems will be used for training, teaching, and research.” Said Khalid Loudiyi, Physics Professor at Al Akhawayn and co-director of the project. “This system will allow Moroccan engineers to access state-of-the art energy storage technologies. Our aim is to strengthen our research portfolio at Al Akhawayn and develop a number of hydrogen applications such as fuel cell vehicles, cooking, and even heating.”

The installation of the wind turbines will promote the use of green energy around Al Akhawayn campus. When the energy produced from the wind turbines is in excess (i.e., the wind turbines generate power that is not needed due to very little demand on campus), it will be diverted to run the hydrogen electrolyser.

Pure Energy Centre, an expert company in renewable and energy storage technologies, was commissioned to design and install a hydrogen energy storage system. This consisted of a hydrogen electrolyser, a hydrogen store, and a fuel cell. The hydrogen electrolyser produces hydrogen from water. The electrolyser splits water into its two main molecules. It uses electricity to break H2O (water) into H2 (hydrogen) and O2 (oxygen) molecules. The H2 gas is stored in a hydrogen tank while the O2 is vented to the atmosphere. In other installations, the O2 is also stored for future usage. The O2 gas is, indeed, used in many industries such as welding and hospitals. The stored hydrogen can be used as fuel for electricity generation, cooking, heating, in vehicles, and in other applications. Hydrogen energy storage plays an important role in the world today as an increasing number of renewable installations see the day.

The wind hydrogen system installed at Al Akhawayn University demonstrates that the intermittency of the wind and excess production can be resolved. The stored energy could then be re-used at a later stage when no wind generation is available through different hydrogen applications.

“We are highly pleased that the wind hydrogen systems installation has been successful and look forward to a bright future for green energy and storage technologies in AUI and Morocco,” said Loudiyi.

The cutting-edge wind hydrogen system installed at Al Akhawayn University has been driven by Sahara Wind Inc. with financial support from the North Atlantic Treaty Organisation (NATO) under its Science for Peace and Security program.