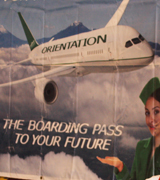 Ifrane, August 28, 2012 - The incoming freshman Class of 2016 has made admission to Al Akhawayn University with 342 new enrolled students, bringing the total number of students registered in Fall 2012 to nearly an estimated 1,800 – a 29% increase compared to Fall 2011.

"We are on our way to meeting one of the university strategic goals and reaching a critical mass of 2,000 students in 2014. Indeed, Fall 2012 has recorded an increase of 29.6% among new degree seeking students, and we expect to reach a total number of 1,850 students,” declared Latifa Ouanaim, Director of Enrollment Services.

Out of a pool of 1,554 applications, 342 made it through Al Akhawayn's highly selective admission tests and interviews. Admissions look for students with strong high school records and with a high potential to achieve Al Akhawayn's mission of educating the "future citizen-leaders of Morocco and the world" (Al Akhawayn University mission statement).

The Class of 2016 is so far the largest in the University's history. The University continues work on the expansion of its on- and off-campus facilities to achieve its strategic admission goals.

“I chose to come to Al Akhawayn for its international dimension, the programs and training offered, and mainly its unique student life,” said Mohamed Al Habib Douch, a freshman in General Engineering and Management.