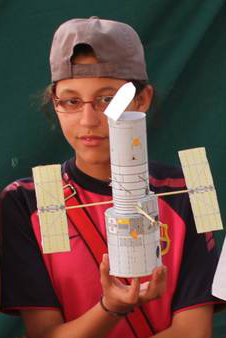 Ifrane, July 16, 2012 – The city of Ifrane hosts its first Astronomy Festival on July 7-11, 2012, organized by Al Akhawayn University in cooperation with the Province of Ifrane, the Network of Amateur Astronomers of Morocco, Al Akhawayn’s Center for IT Innovation (CITI), and Al Akhawayn’s student-run Astronomy Club.

The Astronomy Festival of Ifrane is an initiative of Al Akhawayn University that aims at gathering expert and amateur astronomers around a series of lectures, workshops, observation activities, exhibits, contests, and debates.  For five days, the Festival has succeeded in creating a friendly atmosphere for astronomers and the public to exchange ideas on the universe, the planets, the stars, and more.

“The idea of an astronomy festival stemmed from the need to share scientific knowledge with the general public and to promote science to the youth,” said Hassan Darhmaoui, Associate Professor of Physics at Al Akhawayn University. ”By holding workshops, presentations, and other events, we would like to see more young individuals interested in this field for their careers, and we expect this to become an annual tradition.”

Along side the first Astronomy Festival of Ifrane, two other major international events are held at Al Akhawayn University: the 15th installment of the Global Hands On Universe conference (GHOU), and the Galileo Teacher Training Program (GTTP).

Through such events, and following its mission, Al Akhawayn University aims at promoting national and international development through scientific research and academic programs.

Back in 2008, three students from Al Akhawayn University were recognized by NASA for their measuring of slightly dangerous asteroids within the framework of the NSA Killer Asteroid project. In 2009, Hassan Darhmaoui chaired the training of several teachers called “Galileo Ambassadors”. The teachers benefited from workshops on the use of tools and resources for classroom astronomy education. The same year, Darhmaoui took part in the setting up at Al Akhawayn University of a Cylindrical Radio Telescope (CRT) in collaboration with Carnegie Mellon University, Pittsburgh, USA. In 2011, famous astronaut and scientist Buzz Aldrin addressed the Class of 2011 during the University’s 14th Commencement. Aldrin’s speech also encouraged exploration, development, and international understanding through science.

The first Astronomy Festival, together with GHOU and GTTP, represent pioneering projects for the region of Ifrane, Morocco, and the world. Al Akhawayn University strives to achieve further excellence in science and technology through its faculty and students and through the involvement of its local community. 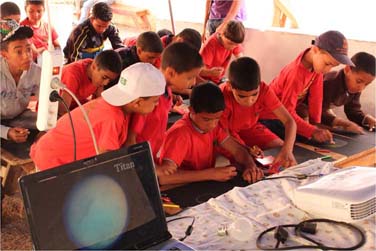