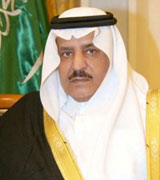 Ifrane, June 17, 2012 – Al Akahwayn University President, the Board of Trustees, and the University community extend their sincere condolences to the Custodian of the Two Holy Mosques King Abdullah bin Abdul Aziz, the Government, and the people of the Kingdom of Saudi Arabia on the death of Kingdom's Crown Prince Nayef bin Abdul Aziz Al Saud on June 16, 2012, in Geneva. Prince Nayef was in his late 70s.

Prince Nayef served as Governor of Riyadh before becoming Minister of Interior in 1975. Last October, he was nominated Crown Prince, following the death of Prince Sultan bin Abdul Aziz Al Saud. As Crown Prince, he would have acceded to the throne upon the death of King Abdullah, who is in his late 80s.

Al Akhawayn University was created in 1995 by the late King Hassan II of Morocco and the late King Fahd of Saudi Arabia. Both Kings were close friends and contributed a lot in the development and growth of the University.