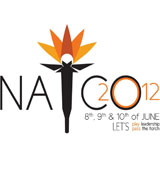 For the first time, Al Akhawayn hosts the NATCO, a conference now in its third installment.

The 2012 NATCO gathered the highest number of national AIESEC delegates recorded so far. The event was an opportunity for the delegates to evaluate and draft a report on the previous term, and to plan ahead for the next term’s strategy. The board members of the 2011-2012 term met with their successors in an atmosphere epitomizing youth leadership, professionalism, and conviviality. Members of AIESEC local committees also evaluated their local boards.

The 2012 NATCO was also an opportunity for the participants to finalize and launch the new website of AIESEC Morocco.

To crown the event, students organized a gala party whereby Al Akhawayn AIESEC Atlas won two awards (out of four): the Absolute Growth Award and the Relative Growth Award. AIESEC Atlas has achieved for the 2011-2012 term about 450% growth as far as student exchanges are concerned.  In fact, Al Akhawayn University received several international interns this year. The interns worked in the University's Azrou Center for Community Development.

As a result of the 2012 NATCO, AIESEC Atlas was nominated local committee and, thus, an official entity of AIESEC Morocco. During the 2011-2012 term, AIESEC Atlas fulfilled all the requirements of its trial period to become part of the global network.

Present in over 110 countries and territories and with over 60,000 members, AIESEC is the world's largest youth-run organization. Focused on providing a platform for youth leadership development, AIESEC offers young people the opportunity to participate in international internships, experience leadership and participate in a global learning environment. What makes AIESEC unique is the youth driven impactful experience that it offers to its members. AIESEC is run by young people for young people, enabling a strong experience to all its stakeholders. For more information on AIESEC, visit www.aiesec.org