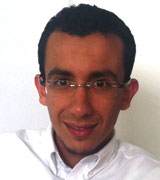 Ifrane, June 4, 2012 – Al Akhawayn University alumnus Hamza Essakhi (’09) was selected on June 2, 2012 to serve in the Moroccan Youth Government. In addition to 25 other young Moroccan citizens, each holding a 'minister' position equivalent to real one in the Moroccan government, Hamza will be playing the role of Minister in charge of Moroccans Living Abroad.

The 26 young 'ministers' will work to spread democracy, good governance, social justice, transparency, and integrity, as values ??they are defending; while enabling many young Moroccans to develop and evaluate public policies. The new government of youth is a civilian non-governmental initiative launched in Morocco by the Moroccan Youth Forum, a national association concerned with youth issues and public affairs. Its main objective is to put into place a scorecard that tracks the progress of the actual government as stipulated in the Moroccan constitution, and to constitute a platform of idea generation and brainstorming for all Moroccan youth bridging their voices to decision makers.

In an interview with Al Akhawayn University, Hamza Essakhi says “It is true that our country does not possess any natural resources but you should know that you are the priceless resource. Value yourself, do not see yourself just as a current student but see yourself as a future leader either in your small community or why not in this country. It is such positive thinking that will help you overcome all the challenges.” He adds “The initiative of the Moroccan youth shadow government counts a lot on your collaboration and support. I see in all of you the fuel and the energy that is going to drive the initiative to reach its objectives and why not to see in two years a youth government constitued by a majority of Al Akhawayn students, at the end of the day it is just a nongovernmental initiative and anyone can borrow the model and innovate on it in a proper way, the most important thing is to see all Moroccan youth working for the best of their country.”

Commenting on his experience at Al Akhawayn University, Hamza Essakhi said that it contributed a lot in shaping his personality. “Al Akhawayn University is a melting pot of people from different cultures and social classes," said Essakhi. "It boasts so much international openness and offers unlimited opportunities - all of which helped me sharpen my personal and professional life.”

Hamza Essakhi studied business at the School of Business Administration at Al Akhawayn University. He obtained his bachelor's degree in 2009. He is currently working as Procurement Operations Excellence Manager North Africa, at Unilever in Casablanca.  During his studies at Al Akhawayn, Hamza Essakhi was president of the student-run Diplomacy Club in Spring 2009, and editor-in-chief of the Arabic student newspaper Al Hayat Al Jamiia from 2005 to 2007.