Ifrane, May 2, 2012 – Al Akhawayn University student-run Rotaract Club crowns a year of commitment to community service after winning the award for Best Rotaract Club in Morocco.

Al Akhawayn's Rotaract Club was the only one among 24 other Rotaract clubs in Morocco that was awarded the prize during a ceremony on April 1, 2012, organized by Rotaract District 9010, which applauded all club's activities and actions accomplished in the year of 2011-2012.

“The trophy is the result of the continuous efforts of Al Akhawayn's Rotaract team, as well as the significant help of the University," said Hamza El Merray, President of Al Akhawayn Rotaract Club. "This has definitely given us more motivation to give and serve our community.”

On May 1, 2012, the Club organized the fifth installment of its annual Circumcision Day. The event provides an opportunity to members of the local population who cannot afford circumcision to do so. This year, 270 children, orphans and children from low-income families, benefited from the operation, and were given gifts and traditional clothes for the occasion, as is custom in Morocco. 14 surgeons, physicians, nurses, and medical staff of the Ofoq Association for Solidarity and Assistance in Salé conducted the operation along with the assistance of the 70 student members of the Rotaract Club.

Previous actions of the club include the annual gala party, which succeeded in raising 210,000 DH to cover the donation of 60 tons of wood for heating to 100 families, 40 bikes to school children from rural areas far from school, and the circumcision fees. The Club has also organized health campaigns and blood drives, among other activities, in cooperation with the large Al Akhawayn campus community as well as external institutions and NGOs.

Along the lines of the mission of Al Akhawayn University and its social responsibility, the mission of Al Akhawayn Rotaract Club is to foster leadership and responsible citizenship, encourage high ethical standards in business, and promote international understanding and peace. Al Akhawayn Rotaract Club had also been awarded  a prize for the Best Action for Public Interest during the Rotaract MENA District Conference in Tunisia on March 2011. 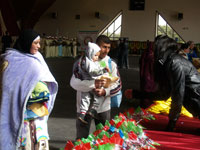 Several other student-run clubs and students have shown commitment to giving back to their local community through successful activities and actions. Al Akhawayn campus in Ifrane has often been a platform for fund-raising, donations, free medical campaigns, awareness activities, and more.

"Al Akhawayn encourages such initiatives by students," said Amina Lahbabi, Assistant Director for Development and Communication. "Most fund-raising activities that the students have launched throughout the years have had a great impact on the local population. Our Liberal Arts model and Community Service requirement work hand in hand to inculcate values of leadership, altruism, and development in the minds of our students so they can be responsible citizen-leaders in their communities and effect a change to better socio-economic conditions in the region and beyond."