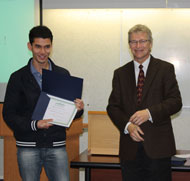 Ifrane, April 20, 2012 — Al Akhawayn University held its first Undergraduate Research Competition and Award Ceremony on April 17, 2012 in order to give undergraduate students a platform to show-case their research projects.

The idea of this research competition sprung from an earlier conversation between El Garah and the president of the student-run Rotaract Club, Hamza El Meray (‘13), a Business major.

“We discussed the different ways to promote research on campus and this idea came up,” said El Garah. “It is a great opportunity for our undergraduate students to challenge themselves, especially that they were free to chose their research topics.”

Eleven students from Al Akhawayn’s three schools participated in the competition with 8 presentations. Students showed high enthusiasm and passion for their research projects.

“I am very happy to have been given this opportunity,” said El Graini. “I want to thank my supervisor and everyone that helped me on this project.”

Computer Science Students Wassim Benhallam (‘12) and Ahmed Mouhtaine (‘13) won the second prize for their research on "Interactive Visualization of Data Structures, Pointers and Dynamic Memory Allocation" . They each received an iPhone 4S donated by the Office of the Vice President for Student Affairs.

Engineering Student Nisrine Bnouhanna (‘13) won the third prize for her research on "Investigations in Passive Radar System Using GSM as Illuminator of Opportunity". She, too, won an iPhone 4S.

Duncan Rinehart, Al Akhawayn faculty and organizer of the event, closed the ceremony by thanking all the participants that made the first Al Akhawayn Undergraduate Research Competition a success. Rinehart informed the students that both the School of Business Administration and Mohammed VI Library will have these papers published in a journal.

“It would be great to see in a journal not only young researchers but published authors as well,” added Rinehart.

The other participants in the Competition, below, received each a certificate of achievement: