Organized in partnership with the Moroccan National Office for Electricity (ONE) and other collaborating institutions, the conference was attended by the president of Al Akhawayn University, Driss Ouaouicha; Al Akhawayn executives and faculty; Gabriel Sala, Director of the NACIR project, the Polytechnic University in Madrid, Spain; Mustapha Bakkoury, CEO of the Morrocan Agency for Solar Energy, and Said Mouline, General Director of Renewable Energy Development and Energy Efficiency in Moroccco, among other dignitaries and experts in the field.

“Together with the Ministry of Energy, Mines, Water and Environment and the ONE, many agencies and organizations are strengthening the groundwork for Morocco’s renewable energy development programs. The Moroccan Government is investing 8 billion euros in renewable energies, aiming at having their production constitute 42% of the country's total electric installed capacity by 2020,” said Ahmed Legrouri, Al Akhawayn University's Vice President for Adademic Affairs.

The implications for national energy development from the conference are so significant that the event was declared to be “a strategic element for our country's contribution to the enhancement of the energy potential in Morocco,” according to Mustapha Bakkoury, CEO of the Moroccan Agency for Solar Energy.

An important part of the two-day conference program was the inauguration of the solar energy project site located at the Al Akhawayn off-campus residential area. This site constitutes the first example of electricity generated by photovoltaics in Africa. The energy produced by this station is injected directly into the ONE network, and the station has been made operational and tested in close collaboration with technical teams from the agency. 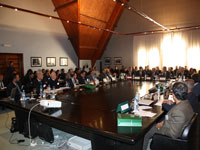 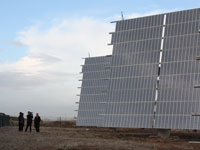 “This project at Al Akhawayn plays an important role in enriching research and development within universities,” said Said Mouline, General Director of Renewable Energy Development and Energy Efficiency in Morocco.

As part of its commitment to support the socio-economic and industrial development of Morocco, Al Akhawayn University contributes to the national energy strategy through training programs and research and development activities in the field. Several actions have been undertaken by the university and others are planned to be launched in the near future. In addition to research and development projects in solar, wind, and biomass energy, Al Akhawayn University has launched a Master of Science program in Sustainable Energy Management.